Dangerous tree to be removed from busy thoroughfare 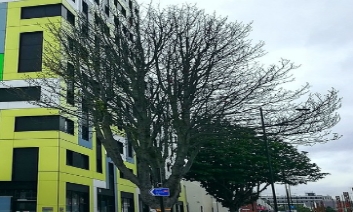 A large, dead and dangerous tree is to be removed next week from a busy pedestrian thoroughfare in Southend town centre.

The 14-16m high horse chestnut beside student accommodation on London Road opposite Sainsbury’s has died as a result of a rapidly advancing fungal infection and now risks branches falling onto passers-by or toppling onto adjacent properties.

The tree was inspected in May by one of the council’s experienced in-house arboriculturists, who found the tree to be in severe decline and infected with honey fungus. The tree has continued to be monitored but the death and rapidly declining condition of the tree means that it now needs to be removed.

Cllr Carole Mulroney, cabinet member for environment and planning, said: “Earlier this week, I announced that the council was suspending all non-emergency tree removals. This is one of those emergency cases: the tree is dead, cannot be saved and now poses a risk to passers-by and properties. There is no value in retaining it and it is a hazard to the public in a highly pedestrianised area.

“Honey fungus attacks and kills the roots of trees and then decays the dead wood. Visible signs of the attack can be seen on the trunk, where it has caused large areas of bark to fall off. Anyone who passes it will notice that, unlike the tree of the same species next to it, it has no leaves despite being the height of summer.

“It is always sad to see an old tree go but I have complete faith in the judgement of our arboriculturists, all of whom share my passion for trees and have studied for many years to enter their chosen career.”

The tree will be removed by the end of next week. An official notice is currently displayed on the tree to advise of its removal.

Officers will subsequently inspect the ground around the tree for underground pipes and cables and use this to inform what can be planted in its place.

On 29 July, Cllr Mulroney announced that all non-emergency tree removals were suspended pending the agreement of a new tree policy that is expected to go before council in the autumn.