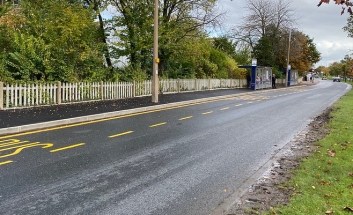 The bus stops and taxi ranks outside Southend University Hospital have been rearranged to ensure passengers can safely exit the bus.

Public safety concerns were raised due to congestion on Prittlewell Chase due to cars accessing the hospital, leading to bus users having to disembark onto the road as busses were unable to pull up directly in the designated bus stop.

A public consultation ran through August, and following this the council’s licensing committee approved works to revoke the two taxi ranks and install one taxi rank of the same length. In addition to this, the hospital bus shelters were moved 100m west of their previous location, now located outside the cardigan wing.

The works, which were undertaken by the council’s highways contractor Marlborough, commenced Wednesday 9 October and were completed Wednesday 23 October.

Cllr Ron Woodley, cabinet member for transport, capital and inward investment, said: “Following concerns regarding public safety, we proceeded with a consultation to ensure bus users were able to disembark safely onto the pavement, rather than into the road. By moving the two separate, existing taxi ranks into one new, larger rank and relocating the bus stops, we have now alleviated this risk.

“I am pleased these works have been completed and am confident these changes will benefit bus users, those needing taxis and also drivers who use this stretch of road, which is one of the town’s main thoroughfares.”