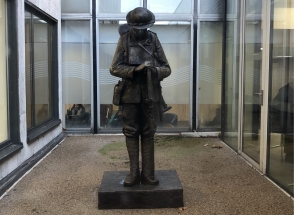 A fibreglass replica of the bronze soldier installed at the Cenotaph in Southend has been installed in the Civic Centre.

On Thursday 7 November, a bronze statue depicting a soldier, in a stance of respect for the fallen, was unveiled in front of the Cenotaph on Westcliff Parade as part of the 100th anniversary since the end of the First World War.

The statue was sculpted by local artist, David Taylor and cast by bronze foundry, Morris Singer. The casting mould has been used to create a fibre glassed resin replica and was installed in the Civic Centre atrium space as the council continues its 100th anniversary commemorations.

Paul Jenkinson, head of parks and open spaces, said: “The installation at the Cenotaph has been warmly welcomed by residents and we are delighted to be able to showcase this poignant artwork in the Civic Centre as well.

“The installation serves as a stark reminder of the sacrifice millions of men and women gave for us to live the lives we do today. I hope the visitors to the Cenotaph and the Civic Centre can enjoy the fantastic installations.”