Worried? Need help with food shopping or other tasks? If you have no friends or family nearby who can help then please call our helpline on 01702 212497. 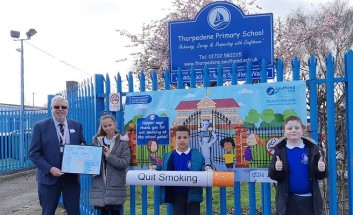 The council’s public health team and Thorpedene Primary School have teamed up in the next phase of the borough’s SmokeFree School Gates campaign.

The promotion asks parents and carers dropping off or picking up their children, not to smoke near the school gates, reducing the risk of children breathing in secondary smoke.

The campaign, piloted in 2019 with Greenways Primary School, involved a visit from Pepper the robot, who discussed smoking and clean air with children at school, followed by a poster-designing competition.

The winning poster from Thorpedene Primary School, designed by Summer in Year 5, will be on permanent display on the school gates near a “SmokeFree School Gates” campaign banner.

Councillor Trevor Harp, cabinet member for health and adult social care, said: “We planted a tree to celebrate the clean air around Thorpedene Primary School, and the children helped to shovel the soil and water their new evergreen. These children have been inspired by Pepper and are vehemently asking the public to keep them safe and well and not to smoke near their school. I fully support them, and would like to congratulate Summer on her poster design, which will remind parents and carers of the need to keep their school gates smoke-free.”

Councillor Anne Jones, cabinet member for children and learning, said: “Thank you to Thorpedene Primary School for being the second in our borough to support our SmokeFree School Gates campaign, and for launching it on national No Smoking Day. It is vital our children can breathe clean air without being subjected to secondary smoke from cigarettes.

“We hope more schools will benefit from the SmokeFree School Gates campaign as it is rolled out across the borough. Please do support this campaign as a member of the public and think twice before smoking near children or near school gates.”