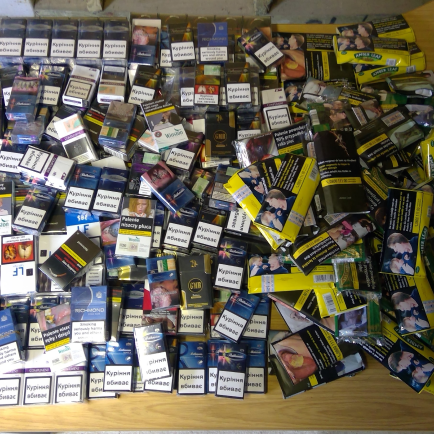 The premises, based on Southchurch Road, was visited by trading standards officers and officers from Essex Police on Monday 7 September, and saw 5,000 illegal cigarettes and 3.5 kilograms of illegal tobacco seized.  The raid was carried out following information given by the public that the shop was selling cheap, illegal cigarettes and tobacco.

Cllr Martin Terry, cabinet member for community safety and customer contact, said: “This is a large haul from our officers and is a great example of partnership working between trading standards officers and Essex Police officers. Thanks to the members of the public that alerted the team to this, a large quantity of dangerous and illegal tobacco products are off our streets.

“Smokers are putting their lives at an even greater risk smoking illicit tobacco products due to the many additional ingredients that can be found in them, including rat droppings, dead insects and asbestos.

“We hope this serves a stark reminder that we will not just sit back whilst the public are being put at risk. We will continue to find and destroy any illegal tobacco products we find, and we will also push for large fines to those involved in the sale of these products. I urge anyone who has information about the selling or storing of illicit tobacco to report it to us in confidence.”

Chief Inspector Ian Hughes, District Commander for Southend, said: “This is another example of the excellent partnership work we do with Southend-on-Sea Borough Council to keep people around the district safe.

“Illicit tobacco products often contain things like rat droppings and asbestos which means smokers are put at even greater risk if they use them. They’re often passed off as the real thing but at a much lower cost.

“As with other illegal and illicit activities, there is also the danger of people being exploited and forced into labour in the creation of these products.

“This seizure means a significant amount of dangerous, illegal products won’t find their way into the hands of the public.

“We will continue working with our council partners to keep you safe.”

Southend-on-Sea Trading Standards is leading in the fight against an ongoing problem with the distribution and sale of illegal tobacco products. Smokers are putting their health at greater risk as illegal cigarettes and tobacco can contain rat droppings, dead insects, asbestos and other harmful ingredients are being mixed with poor quality tobacco to be sold off as genuine branded products at a fraction of the legal price.

And there are fears the trade is helping to fund terrorism and organised crime in the UK and abroad.

The sale of cheap tobacco and cigarettes undermines attempts to reduce the prevalence of smoking, and also makes it impossible for legitimate businesses to compete.

The counterfeit cigarettes are usually manufactured without the self-extinguishing properties of genuine cigarettes and as a consequence pose a greater fire risk, that in some cases have been linked to deaths.