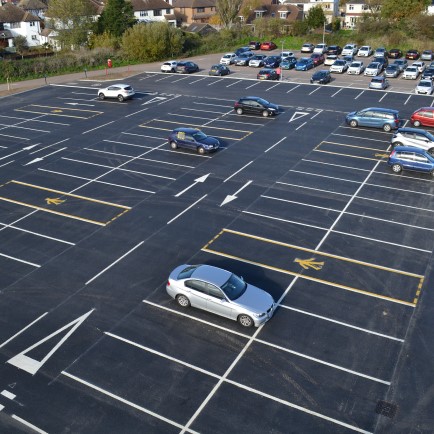 The council’s term contractor Marlborough Highways Ltd started improvement works in August to resurface the existing car park, which was gravel-surfaced, heavily potholed and - as there were no marked bays - could only accommodate ad-hoc parking, reducing the number of vehicles that could park at any one-time.

The work, which was completed at the end of October, has seen the parking area fully resurfaced and a total of 211 parking bays provided. The work took place within the same footprint of the existing car park, meaning no green space has been lost as part of the project. Infrastructure for six electric charging points have been installed and will become available shortly, acknowledging the council’s continued commitment to promoting the use of electric vehicles across the town.

A new dedicated footpath from Lifstan Way has been created to provide pedestrian access to the open space all year round, and also links with the existing footpath that leads to Greenways School, which is used by some parents as part of the school run.

Cllr Ron Woodley, cabinet member for transport, capital and inward investment, said: “This car park has needed work for some time now, so I am delighted to see it ready for use, and the completion of a project funded through our capital programme and through European Funding programme SPONGE.

“The improved layout will benefit not only visitors to Southchurch Park East and our Green Flag Southchurch Park opposite it, but also local parents who use the car park for the school. The dedicated footpath will benefit parents and all park users greatly and I’m pleased this has been completed.

“The car park will also provide additional parking for seafront visitors throughout the busier summer months to support our desire to encourage people to enjoy the entire length of the seafront and beach.

“One of the concerns of local residents was that the work would encroach on the existing green space. We have always been absolutely clear that we would in no way allow the work to impact on the green space and our parks. Our parks team are completing the planting of 50 trees with associated landscaping to the perimeter of the car park which will provide greater green coverage.

“As we continue to work towards creating a carbon-neutral town by 2030, it is important we intensify the roll-out of electric car charging points to keep up with expected future demand.”