Pupils from Earls Hall Primary School gained an unexpected surprise when they returned to school after the recent half-term holidays – a green wall had been added to the outside of their school building. 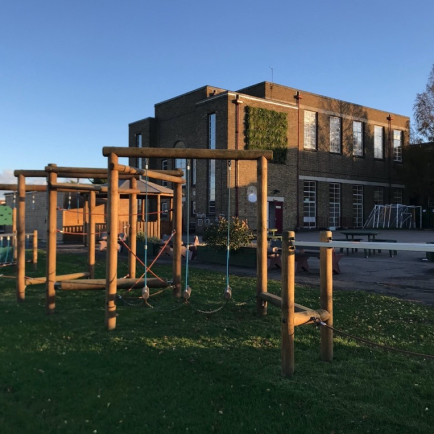 The new feature at Earls Hall was funded through a project called Cool Towns, which is co-financed by the Interreg 2 Seas programme and has helped the school to raise awareness about climate change to their pupils.

The Cool Towns project is designed to highlight the future impacts of heat stress, that are likely to be felt on a more frequent basis across the UK’s cities and towns as a direct result of climate change. Increasing the volume of green space across an urban landscape, for example by greening buildings, has been shown to have the positive impact of reducing heat stress by cooling the immediate area.

The green wall was awarded to the school for their participation in Better Planet Schools. Delivered in partnership with the Young People’s Trust for the Environment, this project provides completely free learning materials, lesson plans and environmental challenges for pupils at participating primary schools in Southend.

It was the second prize that has been awarded to a school in the borough through Better Planet Schools; in February pupils from Chalkwell Hall Juniors teamed up with leading mural artist Louis Masai, to create a mural of a Bluefin Tuna in the school grounds. The Bluefin Tuna was chosen as the subject of the mural because of Southend’s seaside position, and to raise awareness of the endangered status of the species.

Cllr Carole Mulroney, cabinet member for environment and planning said: “The Green Wall concept, which we hope to rollout with other schools, is a wonderfully visual way of firing our children’s interest and learning experience of their environment. We look forward to more projects like this in the future, not just in schools but with other buildings too and we are happy to work with others to further our aim of making Southend a Green City”.

For more information about the Cool Towns project, visit their website.