The winner and runners-up of the 2020 Southend Best Festive Business competition have been announced, with Chantilly Lace Bridalwear from Westcliff-on-Sea winning the public vote. 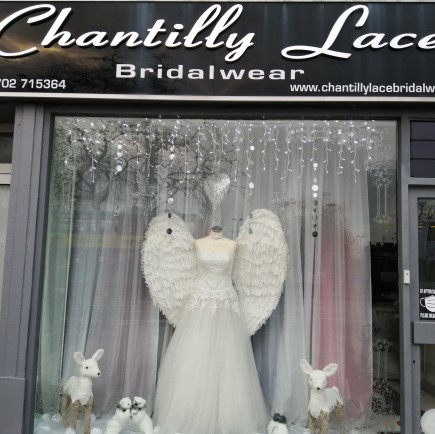 This year, 61 businesses entered the competition, which received a total of 2284 votes. Chantilly Lace Bridalwear, who are based on London Road in Westcliff-on- Sea, proved to be the public’s favourite, with Made You Look Flowers of Canewdon Road, Westcliff-on-Sea coming second and The Broker Freehouse of Leigh Road, Leigh-on-Sea, coming in third.

Originally, only the first place winner would receive a prize: a promotional video production worth £500 by Blatella Films, a local Southend-on-Sea firm. However, Blatella Films have decided to extend the prize to the runners-up too, as the results were so close (only one vote difference between the top two). Ben and Natalie Scarsbrook, owners of Blatella, hope that this offer will support the winners in 2021 after such a challenging year for the whole retail and hospitality sector.

The winner and runners-up were congratulated by The Worshipful The Mayor, Cllr John Lamb on Monday 21 December and given a certificate of achievement.

“This year has been one of the most challenging years many businesses have ever faced. The Best Festive Business competition, which the council’s Economic Development team have ran since 2014, offers a bit of positivity for those who take part and for those residents who experience the festive displays.

“Congratulations to Chantilly Bridalwear, Made You Look Flowers and The Broker and thank you to all of the companies who took part, those who voted and to Blatella films, who have provided a fantastic prize for the winners.

“I would finally like to wish all our businesses throughout the borough a very merry Christmas and a happy and prosperous 2021.”

The winners were decided by public votes on the Business on Sea Facebook page (@BusinessOnSea), where residents and visitors were able to vote for their favourite festive business.