Last weekend saw the Southend Arts Festival draw to a successful close after hundreds of performers and artists were involved throughout a fantastic fortnight (3-19 September) that showcased and celebrated the immense cultural and artistic talent in the Borough. 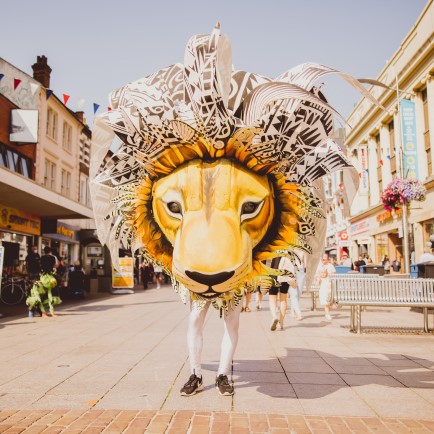 One of the final events in the festival’s calendar was Making Waves – a live street art event with internationally-renowned artist Dan Kitchener aka DANK who specialises in worldwide street art and epic murals on a scale not seen before in Southend.

Dan transformed the side of The Mews in Clarence Road Car Park with his epic murals inspired by the street scene of Japan. Dan’s massive murals have proved extremely popular with the passing public and on social media and was a fitting way to bring the festival fortnight to a close. The festival proved hugely popular on social media seeing over 350,000 people reached and over 16,000 views across all festival-related webpages.

The inclusive festival, which was supported by patron Russell Kane, also featured workshops to support children and adults with learning disabilities. Afghanistan refugees and their children, currently residing at the Park Inn by Radisson Palace hotel, were encouraged to take part in Chalk Fest at Royal Square, Southend, and create pavement art using coloured chalk.

Cllr Carole Mulroney, cabinet member for environment, culture, tourism and planning, said: “It has been such a difficult 18 months for the tourism and local cultural and hospitality sectors of Southend due to the pandemic, which is why I am so pleased that we were able to host such a fantastic Southend Arts Festival to showcase the amazing homegrown talent here in Southend and to help local tourism venues and businesses and our hospitality industry to recover.

“The festival was a great opportunity for our talented pool of creative people and groups from across the community to get involved including photographers, videographers, stage crews, lighting technicians, sound technicians and others.

“A big thankyou to everyone involved including our patron Russel Kane in making the festival happen and judging by the amazingly positive feedback from across the community and on social media, it has all been a real boost for all involved.”

Supported by the Southend Tourism Partnership, the festival was also a huge boost to local businesses due to the increased town centre visitors and footfall generated by events such as street theatre, street art, pop-up galleries and pop-up music events taking place at venues across the town. Leigh-on-Sea trade also increased off the back of Garden Gatherings and the Secret Shanty in the Old Town.

Jacqui Dallimore, chair of Southend Tourism Partnership, said: “We are so proud to have supported the Southend Arts Festival which showcased the incredible talent we have here in Southend. The Southend Tourism Partnership is pleased to have worked with Southend-on-Sea Borough Council to bring this celebration of the arts to our town and it has been a real boost to our tourism and hospitality sector. Congratulations and thank you to all those involved in this fabulous festival.”

The council has an exciting calendar of events lined up including our Halloween Parade – all details are available on our Visit Southend website.