A Book of Condolence has opened at the Civic Centre for people to sign in memory of Sir David Amess, MP. 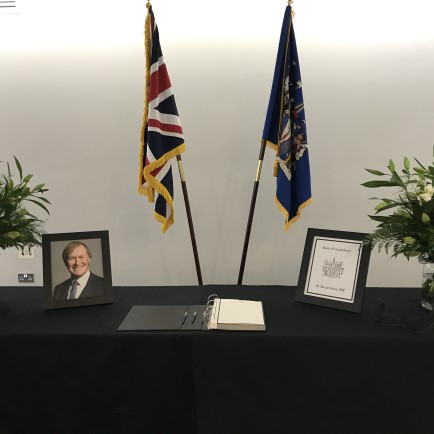 Civic leaders including the Mayor of Southend-on-Sea, leader of the council, political group leaders and the council’s chief executive, were joined by chief officers from Essex Police and Essex County Fire and Rescue Service to sign the Book of Condolence yesterday afternoon (Monday 18 October). The Book of Condolence is open from 10am to 7pm every day in the Jubilee Room on the ground floor of the Civic Centre.

At Midday, prior to the signing of the Book of Condolence, a wreath was laid by the Mayor at Belfairs Methodist Church in Eastwood Road North. She was joined by the political group leaders.

At 2.30pm, council and South Essex Homes staff joined the Mayor, leader of the council and chief executive outside the front of the Civic Centre to take part in a minute’s silence to remember Sir David, in line with the silence held in Parliament.

The Worshipful The Mayor, Cllr Margaret Borton was the first to sign the Book of Condolence and said: “This awful incident has left the town shocked and deeply saddened. We are all still trying to understand why such a terrible thing could happen, particularly to someone so warm and kind as Sir David.

“We have seen a number of community gatherings to mourn the loss of Southend-on-Sea’s biggest advocate, and we continued our own mourning yesterday with a wreath laying, a minute’s silence and by opening the Book of Condolence.

“Anyone is able to visit the Civic Centre and sign the book to leave a message or their thoughts, stories and memories on Sir David. I know that this is still very raw for so many people, and we hope that by opening the Book and enabling people to express their thoughts will provide some comfort to our local community.”