The Household Canvass is now underway. Look out for your canvass arriving soon by email or post. Official household emails are sent from electoral@southend.gov.uk, please follow the instructions. 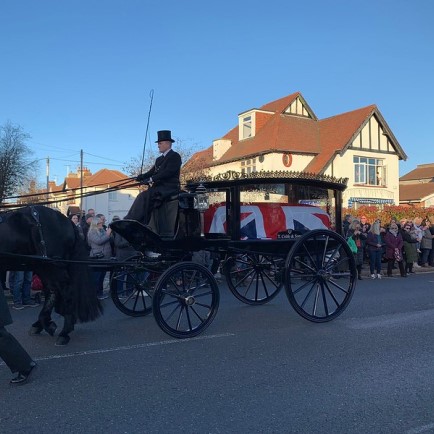 Followed by a horse-drawn procession through the streets.

At 12.15pm the church bells began tolling, as guests began to arrive for the 1pm service. Beautiful music from organist Melanie van Looy, accompanied by The Southend Boys’ and Girls’ Choirs, Leigh Orpheus Male Voice Choir and St. Mary’s Church Choir, greeted the guests as they took their seats and accompanied them during the service.

Firefighters from Essex County Fire and Rescue acted as pallbearers, carrying Sir David, whose casket was draped with a Union flag, flowers and ceremonial sword, into the church.

Members of the public gathered in the churchyard to listen to the service, which included a eulogy from the Right Honourable Mark Francois MP, and readings from Rev Monsignor Kevin William Hale, Rev Clifford Newman, James Duddridge MP, The Worshipful the Mayor Cllr Margaret Borton, and Mrs Jennifer Tolhurst HM Lord-Lieutenant of Essex.

As the service closed, the Right Honourable Ann Widdecombe DSG, read out a statement on behalf of the Amess family, describing how their “hearts are shattered”.

It read: “The family would like to thank everyone for the wonderful, wonderful tributes paid to David following his cruel and violent death. It truly has brought us so much comfort. The support shown by friends, constituents and the general public alike has been so overwhelming. As a family it has given us strength. We have realised from tributes paid that there was far, far more to David than even we, those closest to him, knew. We are enormously proud of him.

“Strong and courageous is an appropriate way to describe David. He was a patriot and a man of peace. So, we ask people to set aside their differences and show kindness and love to all. This is the only way forward. Set aside hatred and work towards togetherness. Whatever one’s race, religious or political beliefs, be tolerant and try to understand.”

Following the service, the casket was carried in a horse-drawn hearse through Southend’s streets, pausing for a moment of reflection outside the Civic Centre in Victoria Avenue and Iveagh Hall, Sir David’s Southend West Conversative Constituency office, in Leigh Road.

The Book of Condolence in the Jubilee Room at the Civic Centre, which was opened in the days following Sir David’s death will close for written tributes at 7pm today (Monday 22 November).

There will be a Requiem Mass for Sir David on Tuesday 23 November at Westminster Cathedral.

Sir David’s family has kindly requested that in lieu of flowers or other tributes, donations are made to the many charities Sir David passionately and wholeheartedly supported. These include; The Dog’s Trust, The Music Man Project, Prost8, Endometriosis UK, Havens Hospices and the Dame Vera Lynn Memorial Statue. A JustGiving page has been set up if you would like to donate: Sir David Amess Tribute fundraising on JustGiving.