The Worshipful The Mayor of Southend-on-Sea, Cllr Robinson, presided over two special celebrations today which commemorated the pier’s history and looked forward to its bright future. 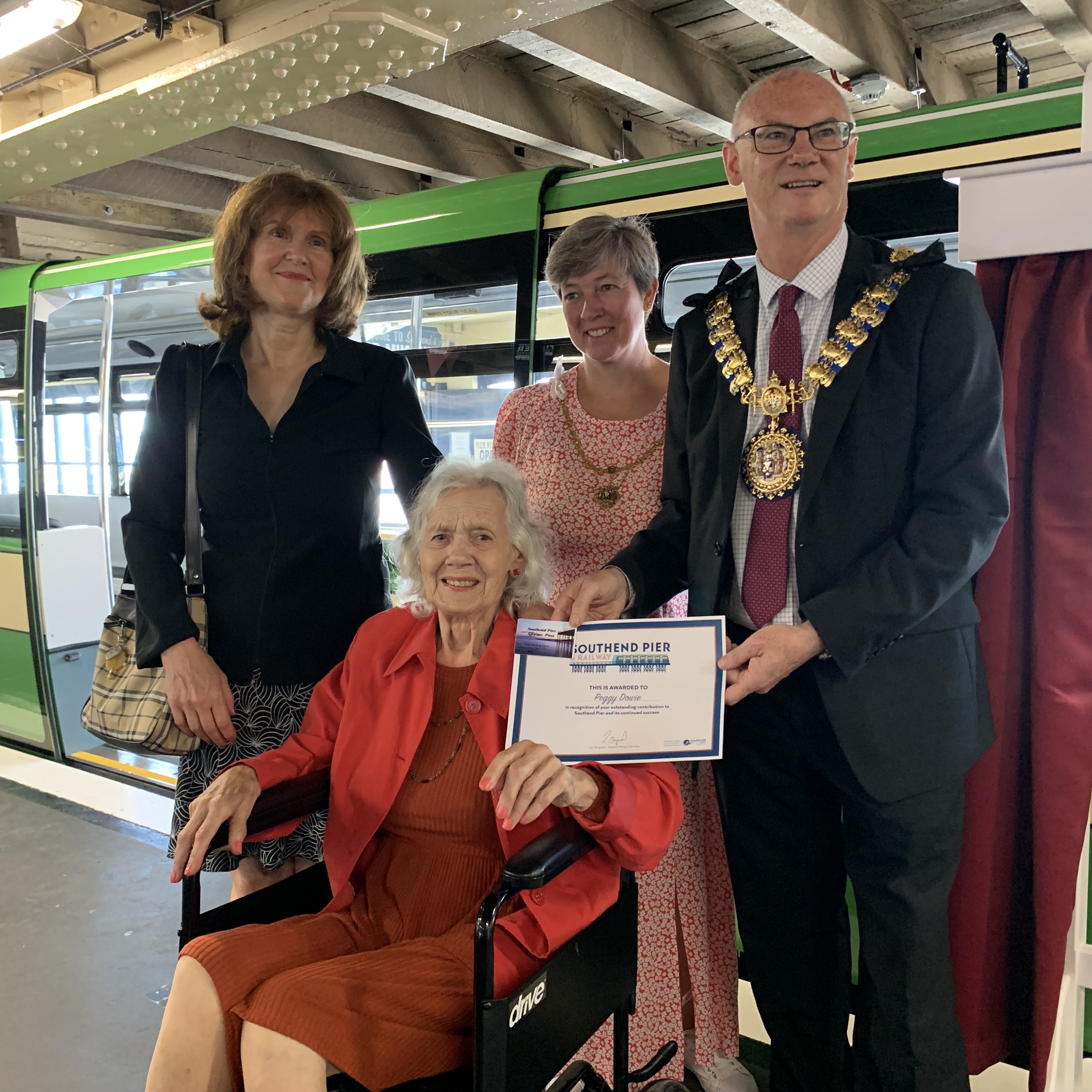 First on the agenda was the unveiling of a plaque to commemorate the remarkable achievements of former pier trustee and founder of the Pier Museum, Peggy Dowie, who was in attendance with her daughter, Marie, along with friends, former colleagues and other trustees of the pier and its museum.

In 1976, Peggy and her late husband Ron reacted to plans to close the pier after a fire and, along with other volunteers, they established the Pier Society which ramped up support for the pier, produced ‘save Southend pier’ t-shirts, and put pressure on the council to keep the pier open. After four years of campaigning Peggy, Ron and the society achieved victory by keeping the pier open for future generations.

Peggy and Ron also came up with the concept of a pier museum to house Victorian pier artefacts and memories from its Victorian beginnings. Four railway carriages were saved from the scrapheap and were restored to their former glory and they are now exhibited in the museum which opened in 1989.

After 30 years Peggy retired from the museum, and it is now run by volunteers. Peggy was also presented with a lifetime pass for free entry to the pier.

An emotional Peggy said: “I am so overwhelmed and didn’t expect to receive this honour. Ron would have loved this. I want to thank everyone so much. I have so many great memories of the pier and the wonderful people I met and worked with.”

The Worshipful The Mayor, Cllr Robinson, said: “I am delighted Peggy was here today to receive this special honour. Peggy is seen as the pier’s biggest advocate and custodian of its preservation. The commemorative plaque is a fitting and permanent reminder of everything she has done for the pier.”

The other important duty for Mayor was to announce the name of the second electric pier train which was even more significant with Peggy in attendance. The second train is named William Bradley.

William was the pier head light keeper from 1871 to 1891 and went on to be a councilman and alderman of the city. During his time as lightkeeper he lived with his wife and daughters in a house at the head of the pier and was paid £1 per week to keep the navigation light burning at night by lowering it into his house as an aid to mariners out on the river.

Bradley received public recognition for his various services including medals from The Royal Humane Society and The Royal National Lifeboat Institution, receiving a silver medal for rescuing a man from the capsized steam tug, Jubilee, on the night of 2 November 1887.

He was also on the Pier Committee and helped formulate the policy that kept the pier financially successful at that time. The first electric train was named Sir David Amess in March and was unveiled by HRH The Prince of Wales.

Cllr Carole Mulroney, deputy leader and cabinet member for environment, culture and tourism, added: “It’s also a great day for Southend and the pier’s future with the official unveiling of the second electric train’s name, William Bradley, who lived and worked on the pier, saved lives, and went on to become councilman and alderman of the council. It’s brilliant to have his name on the train alongside Sir David Amess on the other train. Peggy and William are both instrumental to the pier’s legacy and seeing them both being honoured today was very special.”

Southend’s pier museum is open for the summer season and costs £2.50 for adults and children under 16 get free entry.  For more information visit the Southend Pier Museum

For updates of when the two new electric pier trains will be running check out the council’s social media channels or visit the Southend Pier website.