We are working with various partners to end human trafficking and modern slavery. 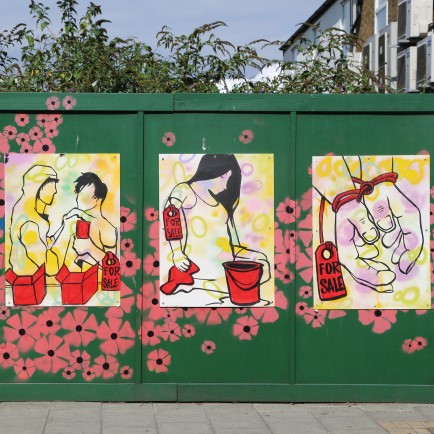 As part of the World Day Against Trafficking in Persons, the council, Essex Police, Southend Against Modern Slavery Partnership and Gangmasters & Labour Abuse Authority will be in Southend High Street on Friday 29 July, from 10am, with an information unit under the railway bridge where anyone can pop along to find out more about how to spot the signs of suspected trafficking and modern slavery and what you can do to help.

They will be joined by local artist Nik Vaughn who will be working on an exclusive new piece of street art. Nik’s hard-hitting artwork and posters have featured in previous campaigns highlighting how exploitation can occur in relation to debt bondage, forced labour, sexual and criminal exploitation, and domestic servitude. Other pieces of his previous artwork and posters will be on display at Southend Central train station.

Officers from Essex Police will be engaging with businesses in and around the high street providing information, advice and guidance on the signs to look out for and how to help prevent suspected trafficking and modern slavery.

Inspector Paul Hogben of Southend Community Policing Team said: “Trafficking is increasing across the UK and is happening here in Southend. It can take many forms. Adults or children may be sent to work as prostitutes or forced into manual labour for little or no money.

“We’ve seen examples of people being made to live and work at cannabis grows, and children being told to travel long distances as part of County Lines drug gangs. These people are routinely subject to threats and violence and often forced to live in horrendous conditions.

“We work very closely with partners in Southend to try to identify and support victims of human trafficking and modern slavery. Alongside partners from immigration and adult sex work support agencies, we’ve targeted suspected brothels and street prostitution to safeguard people who may be exploited for sex work.

“And we work with Children’s Services and the British Transport Police to identify children being trafficked on the railway system to deal drugs. We will continue to do all we can to prevent and disrupt this type of criminality.”

Cllr Martin Terry, cabinet member for public protection, said: “People trafficking and modern slavery is a global problem but we want to do all we can in Southend to highlight the issue and stop it happening in our city.

“If people know what modern slavery is and what exploitation looks like, what the signs are, then it is easier for people to report it. Often those trapped in these situations are the least able to raise the alarm, so we need our community to be vigilant and report any concerns they may have. As awareness spreads, we are seeing increasing reports of people trafficking. There are a number of Government agencies and charities who can support victims and prosecute offenders.”

The day will also see the council and partners share important messages and videos across social media about how you can help spot the signs which are often hidden, which makes it very hard to spot potential victims. Signs of exploitation include those who are coerced, controlled, abused, isolated, in debt, malnourished, dehumanised, restricted, anxious or dependent.

To find out more about the subject and what you can do to help, visit the Southend Against Modern Slavery Partnership website.

If you believe you have information about someone being a victim of Trafficking or Modern Slavery you can report it to Police on 101 or 999 in emergencies, online at www.essex.police.uk or through the modern slavery helpline on 08000 121 700.