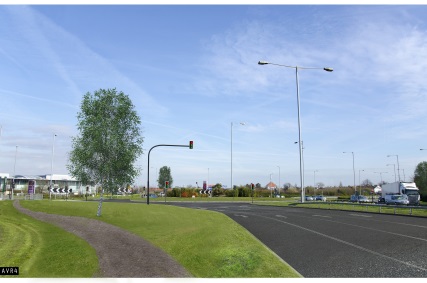 Southend-on-Sea Borough Council has set out the next steps in its project to upgrade a major junction on the A127.

The £4.7m* upgrade of the roundabout on the junction of the A127 and B1013 – known locally as the Tesco Roundabout - will support Southend and Rochford councils’ ambitions to create 7,380 new jobs in the area around London Southend Airport over the next 15 years.

Earlier this year, the Council secured a £3.3m* grant from the Department for Transport (DfT)’s Local Pinch Point Fund towards this work. The remainder of the project cost (£1.4m*) will be met by Southend-on-Sea Borough Council’s own capital budget.

Key features of the plans include:

The reconfigured junction will be able to handle more traffic and, as an added benefit, will make it easier for vehicles to exit from the Tesco side of the roundabout (Thanet Grange).

Southend-on-Sea Borough Council is soon to appoint a contractor for the main infrastructure work, with an announcement expected during the week commencing 29 September. Once a contractor is appointed, work on the highway is scheduled to start on 27 October and complete in the spring.

He said: “Developing the area round the airport is pivotal in our plans to create valuable jobs and boost the local economy.

“However, for these developments to go ahead, we first need to have the highways infrastructure in place to handle any increase in traffic. It’s all about keeping the economy going and the traffic flowing.

“We listened carefully to local people’s views during our public engagement over this junction. This clearly highlighted the improvements people want to see and we’ve incorporated these into our final design.

“We’ve already seen the difference that upgrades to the junctions at Progress Road and Cuckoo Corner have made. This further investment by the Council and the Government in our town will help us make Southend a more attractive prospect for businesses looking to invest in the area.

Keeping Southend “open for business”
The Council is committed to keeping disruption to motorists and neighbouring residents and businesses to a minimum but some off-peak lane closures and delays will be inevitable. There are no planned lane closures during peak hours (Mon-Fri, 7.30-9.30am and 15.30-19.00pm). Furthermore, there are no planned weekend lane closures from mid-November to first week of January to protect Christmas shopping trade.

Councillor Terry added: “I want to reassure Southend’s business community that the town will very much be open for business throughout the construction works.

“However, with work of this scale, some delays will be inevitable and we would advise anyone using this section of the A127 to check local traffic reports and plan extra time into their journeys where necessary.

“The Council has carefully considered the working hours to minimise the impact on businesses. That’s why we’re not planning any weekend lane closures during the busy Christmas shopping period.

“We’ll also be encouraging car-sharing and alternative forms of transport throughout the construction work and would encourage anyone who regularly uses this stretch of the A127 to visit our award-winning transport site www.ideasinmotionsouthend.co.uk for inspiration.

Keeping you informed
Southend-on-Sea Borough Council has made a commitment to keeping road-users, residents and local businesses up to date on the progress of the works.

The main source of up-to-date information throughout the project is the www.bettersouthend.com website.

Public information boards have already been placed at Tesco, The Forum and the Council’s Customer Care Centre on Victoria Avenue. Information signs have been erected at on the approaches to the roundabout on the A127 and Nestuda Way.

As part of the contract being awarded for the construction, the contractor will employ a dedicated Public Liaison Officer to act as a single point of contact for the project. Once appointed, they will write to residents and businesses immediately neighbouring the roundabout so that they know who to turn to with any enquiries.