The ‘Sir David Amess’ Pier train goes back into service

The Sir David Amess pier train has reopened to the public. 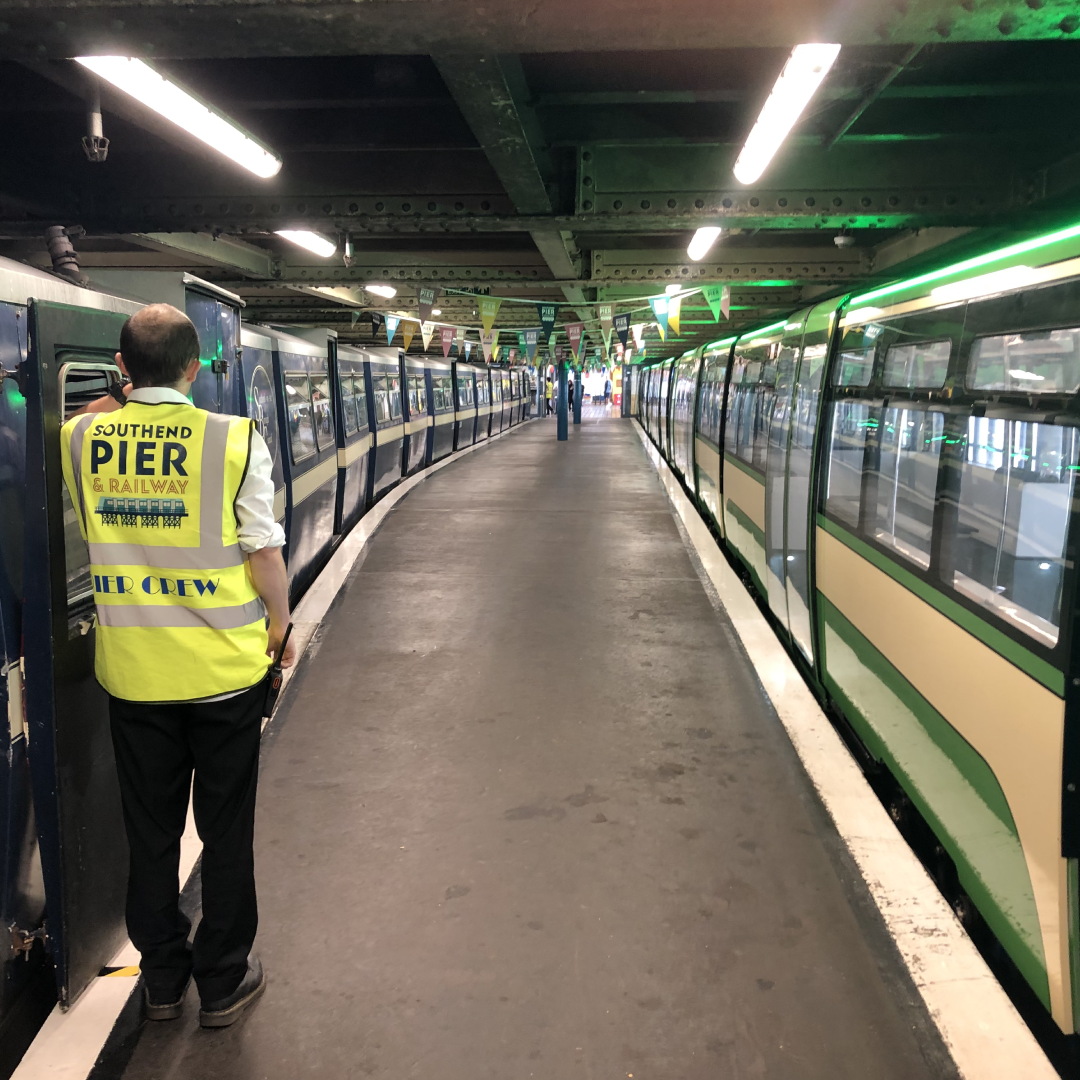 The new electric Pier trains are replacing the existing blue diesel trains, which have been in operation on the Pier since 1986. This is a major £3.5m investment by the Council into the pier and the city’s tourism. Heritage cream and green pier trains previously ran on the pier from 1949 to 1978 and the vintage design was agreed for the new trains following a public vote on social media in 2020.

Cllr Martin Terry, cabinet member for community safety, says: “The team have been working tirelessly to deliver this project and overcome every obstacle. With technology as advanced and unique as this, it has been important for the council to adopt a safety-first approach and get this right.

“A lot of the work has been about tweaking and assessing. If one stage isn’t performing to a decent enough standard, things need to be changed until it is, as our priority will always be the safety of those visiting the pier.

“It has certainly taken longer than we hoped, and we are frustrated that we have not been able to get them up and running this Summer, but now we can look forward to riding the new trains and I’m sure many people will welcome and be able enjoy them for many years to come.”

For more updates on the pier and new pier trains, including times and more, head to the pier’s dedicated website: Welcome to the World's Longest Pleasure Pier | Southend-on-Sea (southendpier.co.uk)

The new electric Pier trains will replace the existing blue diesel trains, which have been in operation on the pier since 1986. This is a major £3.5m investment by the Council into the pier and the city’s tourism. Heritage cream and green pier trains previously ran on the pier from 1949 to 1978 and the vintage design was agreed for the new trains following a public vote on social media in 2020.

The Sir David Amess train was the first to arrive at the Pier and following testing, entered service in April but stopped later that month due to safety issues with the doors. The issues identified some works that needed to be undertaken before it could be reassessed and enter service.

The second train, William Bradley, was delivered to the Pier earlier this summer, and is undergoing its initial onsite testing to ensure that any concerns are addressed prior to launch. This means that the public may have seen the train being tested (without passengers on it).

Why has it taken longer than anticipated?

There has been an intense period of safety tests and checks, which took place along the pier to ensure that the trains can successfully operate with the existing infrastructure. The new technology has had a lot to contend with, with engineering plans having to tackle challenges including the length and age of the Pier structure, salt from the sea and constant damp affecting the tracks and undercarriages, and ensuring these aspects are included in testing phases. This meant that due to the unique nature of these trains, tests could only be carried out in-situ, whereas most mainland trains typically carry out testing over a long period and out of sight of the public. Eagle-eyed visitors to Southend seafront would have seen testing being completed at various points over the past year.

Once a reportable fault was identified, the trains then needed to meet the approval criteria set out by the Office of Rail Regulation to determine next steps of the testing phase.

The testing phases needed to be recompleted each time an element has not meet standards for passing that phase. This depends on the issue and how quick it is to solve. For example, a blown fuse is relatively quick to identify, test and resolve, but if something breaks down due to need for a new part, this will likely take a while longer. Severn Lamb have been on top of the issues identified and have addressed all major concerns on both trains.

The trains were assembled in the UK but showcase tailor-made quality engineering with specialist parts from all over the world. The delivery of some of these parts were affected by both Brexit and Covid-19, consistent with some other construction and manufacturing delays, in the early stages of the project. Later into the testing stages, the technology encountered some setbacks with the battery charging and, as with any new and bespoke technology, needed to be adjusted and retested until a satisfactory level of compliance was reached. The battery charging issues have been resolved and are now performing above initial expectation.

Southend-on-Sea City Council along with its delivery partners Severn Lamb Ltd have been working hard since these challenges arose to be able to help get the trains into service, keeping staff and passenger safety as their top priority.

These trains are completely bespoke, made especially for Southend Pier by Severn Lamb. They have been designed, built and now tested in the location of our pier which has space constraints and away from a normal manufacturing location. When testing has taken place and tweaks or repairs need to be made, due to the shape of the Pier and location of the tracks being above the sea, it isn’t always easy for engineers to reach the parts of the train they might need to as there are no dedicated inspection areas on the live section of the track. We have also had to take the time to make sure our staff and contractors are safe when working on the equipment.

Have the issues cost the council extra?

Everything has been under the existing contract agreement with no additional costs to the Council.

Whilst it is very disappointing that we have not been able to run a two-train service over the Summer, we have nonetheless enjoyed a very busy summer and record number of pier visitors to date in 2022.

The old diesel train has been providing a regular service to the end of the pier and will continue to do so until both new trains are in service.