A new exhibition at the Beecroft Art Gallery displays ‘Two Views of Southend’, a photographic snapshot of life in Southend in 1972, by Josef Koudelka and Ron McCormick. 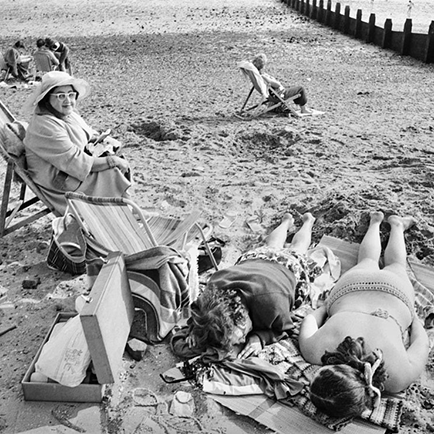 The showcase of McCormick and Koudelka’s project will allow visitors to see ‘Two Views of Southend’ on display in its entirety for the first time in 50 years. These photographs offer a fascinating insight into life in Southend in 1972, with images that are as significant now as they were 50 years ago.

In 1972, as part of a major project involving eight towns, The Arts Council commissioned McCormick and Koudelka to take candid photographs of people in Southend. The aim was to reveal to the people of the town how they and their environment are seen by two outside observers.

Josef Koudelka took his first photographs as a student in Czechoslovakia in the 1950s and produced what would later become famous images of the Soviet invasion of Prague. Koudelka sought political asylum in 1970 and shortly thereafter joined Magnum Photos. Koudelka went on to win a number of prestigious awards and significant exhibitions of his work have been held at institutions ranging from the Museum of Modern Art and the International Centre of Photography in New York, to the Hayward Gallery in London.

Ron McCormick studied painting at Liverpool College of Art and undertook post-graduate studies at the Royal Academy Schools in London (1968-71) and has published internationally for 50 years. McCormick worked as a reportage photojournalist throughout the 1970s for a range of publishers including Time Out, Design Magazine and the Socialist Worker Press. Exhibitions of his work have been shown at institutions ranging from the Serpentine Gallery to La Photo Galeria in Madrid.

The two photographers were inspired by the influence day-trippers had (and continue to have) on street and beach life in Southend. The photographs in the exhibition capture a literal snapshot of life in Southend with candid shots of people enjoying a day at the seaside, as relatable to an audience now as they were in 1972.

Kevin Marsh, assistant curator of art at Southend Museums, said: "We are so excited to share ‘Two Views’ in its original form. The images taken by Koudelka and McCormick are alive with the thrills and excitement of a day at the seaside and though 50 years have passed, these wonderful photographs continue to show why Southend holds such as special place to the many who continue to visit."

Cllr Carole Mulroney, cabinet member for culture, tourism and the environment, said: “I am really looking forward to visiting this exhibition. We all love a bit of nostalgia and have our memories of Southend. So to see in pictures how much has changed over the last 50 years and reflect on the past will hopefully inspire where Southend can go from here. Tourism has helped to shape our city and will continue to do so for the next 50 years and beyond. A city's development is made up of past, present and future, and it is there for us to create.”

To find out more about the exhibition and how to get there, visit the Southend Museums website.