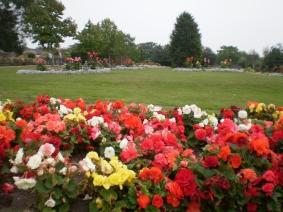 Footpaths on cliffs in Leigh have been closed to the public because ground movement has deteriorated their condition and made them unsuitable for continued use.

Since the flooding in August 2013 – during which the ground on the cliffs were saturated with water - the level of ground movement on Leigh Cliffs below Cliff Parade has become increasingly evident, causing the paths to become cracked and uneven.
To ensure the safety of the public, some of the footpaths have now been closed to the public and fences and signs have been erected.
Councillor Graham Longley, Executive Councillor for Enterprise, Tourism and Economic Development, said: “I appreciate that this is a significant area of this part of the cliffs and its closure will come as a great disappointment for those who use these paths at this scenic spot.
“However, I’m sure local people will understand that public safety has to come first.
“This decision comes after significant studies of the area and discussions with local ward councillors. These concluded that the lower paths in the area, which are in better condition, could remain open to the public.
“The upper paths will need to remain closed until further notice. The Council will continue to monitor ground movements and will need to consider how and when to bring these paths back into use once the ground has stabilised.”
Tweet