New crossing on the A127 – just what the doctor ordered 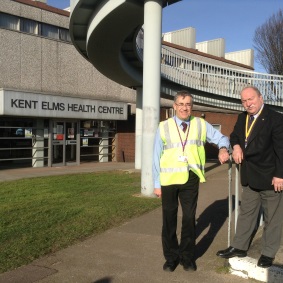 Work could start later this year on a new surface-level pedestrian crossing at the A127 Kent Elms Junction.

This will help people with restricted mobility to acccess vital health services, the library and local schools.

Southend-on-Sea Borough Council’s cabinet is to consider proposals to build a new traffic signal controlled pedestrian crossing at the A127 and A1015 Kent Elms Corner in advance of a major junction upgrade.

Currently, the only way for pedestrians to safely cross the five lanes of traffic is by using the footbridge, which has stepped ramps. This makes it particularly difficult for people with mobility problems to safely cross the road in order to access the Kent Elms Health Centre, library and local schools. This bridge, installed many years ago, does not meet Disability Discrimination Act requirements to provide ramps and engineers have said the design of the structure will not allow the removal of the spiral stepped ramps either side.

Under the proposals being considered by Cabinet, underground services, such as electricity and telecommunications cables, would be moved further away from the highway and a surface-level pedestrian crossing installed this year.

This preparatory work will pave the way for a major improvement of the junction and removal of the footbridge, currently scheduled to commence by autumn 2016.

The new staggered crossing would not affect traffic flow as it will operate within the current timing arrangements for the traffic signals, where there are opportunities to cross pedestrians to the west of the junction in gaps in the traffic. The layout will include a widened central area for pedestrians to wait in.

Cllr Martin Terry, Executive Councillor for Public Protection, Waste & Transport, said: “Our plans for Kent Elms are just one part of a package of junction improvements along the A127 designed to keep traffic flowing, improve crossings and keep the economy growing.

“Over the coming weeks, we will see the finishing touches being put to the Tesco roundabout. This will increase the capacity of this critical junction before plans to generate around 7,000 new jobs across two new business parks near the airport come to fruition. Our next step will be to move on to the Kent Elms junction, so it is encouraging to see the preparatory work starting so soon.”

Deputy Leader of the Council, Graham Longley, said: “Investigating improved facilities for pedestrians to cross at Kent Elms was a commitment of the joint administration when it formed last year. I am delighted that, not only is a new crossing being investigated, but we are able to now announce that it will be built.

“By autumn 2016 we aim to have started on upgrading the Kent Elm’s junction in earnest. However, we’re in a position to be able to start on the crossing and improve access to the Kent Elms health centre before then. That’s why this report has been brought forward and I look forward to discussing it with my fellow cabinet members on 17th March.”

Funding for the new crossing would come from the £5.02m total project fund for the Kent Elms Corner project. This project funding is made up of £4.3m from the Local Growth Fund and a £720,000 contribution from the Council’s capital programme.