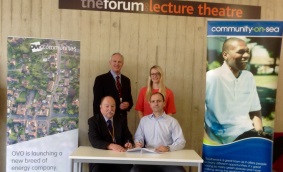 Southend will soon have its own energy company for the first time in over 60 years.

This is after the Council signed up to an agreement to form a new local energy company working in partnership with energy supplier OVO Energy.

Following approval by the Full Council to form the company on 26 February, the Council has now signed a legal agreement with the firm to establish the initiative. It will be the first time Southend has had its own energy company since Southend-on-Sea County Borough Corporation was disbanded in the late 1940s when gas and electricity energy industries were nationalised.

The company, whose name is to be decided upon along with other marketing details in the coming weeks, is expected to be launched in the next few months and will be available to residents and businesses with a Southend-on-Sea postcode.

Competitive tariffs will be available to residents and businesses in the Borough looking for a local alternative to their current supplier. There will be particular benefits for the Borough’s most vulnerable customers – those who are fuel-poor and those on pre-payment meters.

Signing the agreement at The Forum with Managing Director of OVO Communities, Craig Morley, he said: “Today is a major milestone for Southend. What we’ll be offering is attractive energy tariffs, fair contracts and a means of keeping local money in the local economy.  Our decision to partner with OVO is also reinforced by the supplier recently becoming the first “Which? Recommended Provider” for energy.

“There’s a huge opportunity to save money by switching energy suppliers. Indeed, the most recent Essex Big Energy Switch resulted in participants saving an average of £260 on their energy bill in a single year.

“With the new energy company, not only will all local residents and businesses benefit from a competitive deal, but some of their energy bill will be reinvested in local public services at a time of extensive belt-tightening for local authorities. What’s more, we’ll be able to make decisions about how some of the income could be used to support the fuel poor at a local level.”

Craig Morley comments: “We are excited to be working with a Council that has such a clear vision for their community and the difference they can help make to their residents. We will be working with key community representatives throughout Southend to ensure we are getting to speak to those customers that will most benefit from the new tariff. With no exit fees and considerable savings expected, we hope Southend residents really get behind this new energy offering.”