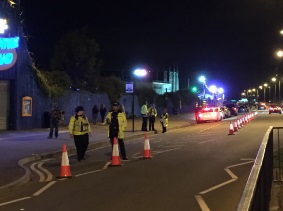 Acting on police intelligence that indicated an event would take place from 7pm along the seafront, Police Officers and staff joined Council officers and parking enforcement contractors, APCO, to stop vehicles taking part in the cruise along the seafront. They issued drivers taking part with notices explaining the conditions of an injunction recently obtained by the Council, which prohibits any car cruise events on the seafront that put public safety at risk or cause a public nuisance.

As well as serving notices, the teams took enforcement action against driving and traffic offences.

The operation was conducted between 7 and 9pm, in which period:

Importantly, there were no incidents of bad driving, burn outs or pouring oil on the road. Instead, those who attended – estimated to be around 100 during the course of the evening - parked up and chatted and then left.

Cllr Martin Terry, Executive Member for Public Protection, Waste & Transport, said: “I’d like to thank all the Council staff and Police for what was a successful operation.

“By mobilising a high-visibility patrol on the seafront and engaging directly with the participants, they were able to send out a clear message that the reckless behaviour demonstrated by a small number of participants in similar previous events will not be tolerated. I am also grateful that those who did turn up to the event conducted themselves properly.

“I’d like to reiterate that organisers of official car events have nothing to fear by this injunction. However, public safety is our top priority and anyone intent on behaving in a way that puts the public at risk of harm or causes a public nuisance at an unauthorised event could land themselves in prison.

“Hopefully, word is now out that we won’t allow our seafront to be used as a racetrack and we will continue to work with the police to monitor intelligence and enforce our injunction accordingly.”

Anyone who would like to organise an event in the Borough can find further guidance from our events team by calling 01702 215011 or by visiting the Council's website www.southend.gov.uk